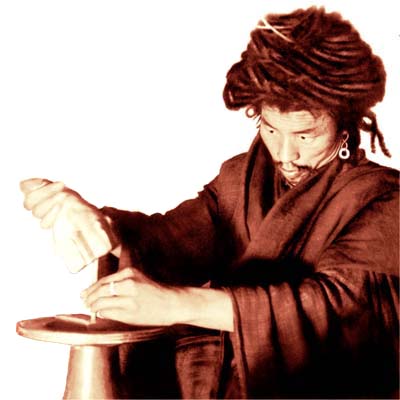 Jé-trül Rinpoche is a ngak’phang Lama who lived in Gangtok, Sikkim – a small country which is classified as a ‘protectorate’ under the international care of India. Sikkim is a Vajrayana Buddhist country nestled between Nepal and Bhutan. It is known as one of the ‘hidden lands’ of Padmasambhava and contains many pilgrimage sites. Ngak’chang Rinpoche and his friend Gyaltsen Rinpoche made a pilgrimage there in 1990 when they visited DoDrüpchen’s sangyum who received them with great cordiality. DoDrüpchen’s sangyum is one of the great elder yoginis of the Nyingma tradition. This photograph of Jé-trül Rinpoche was taken in 1961 – just after the exodus from Tibet. He wears his uncut hair in the Zur phud yogic style and wears the conch earrings of the gö-kar-chang-lo’i dé (gos dKar lCang lo’i sDe). In this picture he is engaged in making gTormas. gTormas are created as three dimensional symbols of one’s connection with the yidam in terms of Mahayoga. They could be described as visionary ærials which enable the Mahayoga tantrika to amplify his or her practice through the medium of tangible form. Mahayoga often defines the practice of ngakpas and ngakmas in terms of their activities for the benefit of others. gTormas of the type shown in this picture are typical of the simpler forms of gTorma which are created for most yidam practices.