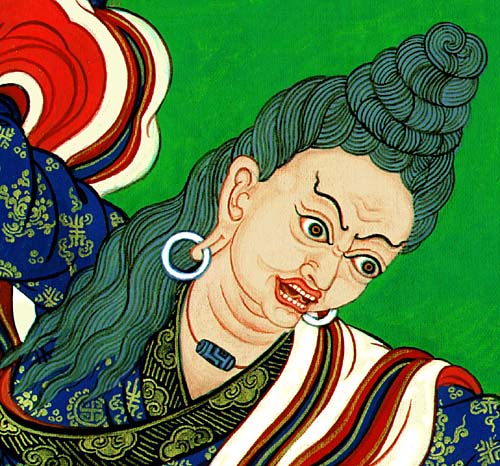 face detail from a thangka painted by Kumar Lama

Jomo Pema ’ö-Zér is shown here as a middle-aged woman – the time at which she gave birth to Aro Lingma. Her wrathful expression is an indication of her power of practice rather than representing her natural disposition.

Khandro Déchen said of wrathfulness:
It is often falsely assumed that wrathfulness in a Lama is connected with a harsh or severe temperament – but this is definitely not always the case. Neither is it the case that a Lama whose main practices are wrathful will have a fierce disposition. The wrathful demeanour of Jomo Pema ’ö-Zér is more connected her ‘vibrant immediacy’ and her extraordinary capacity to cut through confusion in a simple and direct manner.

Ngak’chang Rinpoche said of Jomo Pema ’ö-Zér:
Wrathfulness in the sense of Jomo Pema ’ö-Zér’s manifestation is concerned with the intrinsic ‘threat’ of the proximity of the beginningless enlightened state. From the point of view of duality – rigpa is the wrathful tiger who devours her prey – skin, flesh, sinew, muscles, cartilage bone, and all.