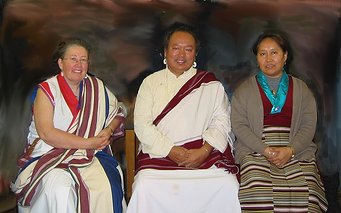 Jomo Chö-ku Wangmo is Lopön Ögyen Tanzin Rinpoche’s Sang-yum (spiritual consort / wife). Ngala Nor’dzin comments:
Lopön Rinpoche and Jomo Chö-ku stayed with us at Aro Khalding Tsang for a week during this visit. Jomo Chö-ku did not accompany Lopön Rinpoche on every visit and teaching as she preferred to stay in our shrineroom and continue her practice and study. She could be found studying texts during every available moment of the day and clearly took great pleasure in her studies. She is an extremely modest and kind person, and a dedicated practitioner.

Ngala ’ö-Dzin continues:
Lopön Rinpoche and Jomo Chö-ku viewed our collection of Dharma related videos over the first few evenings of their stay, including recordings of Chögyam Trungpa Rinpoche teaching in the US, and images of Tibet. Unfortunately Lopön Rinpoche had a rather heavy cold during the second half of their visit. Jomo Chö-ku was most attentive to his needs, and he continued with his teaching schedule nevertheless. On returning to our home after teaching in Bristol one evening, we thought they would wish to retire straight away, but to our surprise they asked to watch something. We were even more surprised when they chose the film ‘Shrek’. It was a delight to watch them laughing at this comedy animation and appreciating each other’s enjoyment. As gö-kar chang lo practitioners, Lopön Rinpoche and Jomo Chö-ku demonstrate the warmth and appreciation of their vajra relationship.