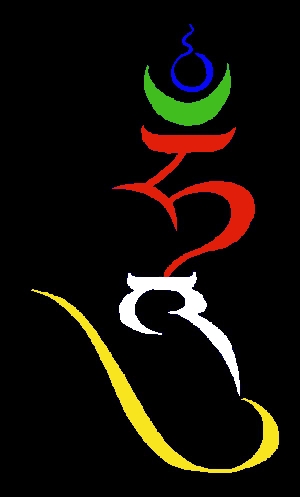 the seed syllable of Padmasambhava and Yeshé Tsogyel

The colours of the Hung according to the liberation of beings from the six realms is different from that of the five elements – the entire sequence changes. From the top down: the thig-lé is off-white (gods); the crescent moon is olive green (asuras or jealous gods); the Ha is dusky red (humans); the ’a is palid yellow (animals); the vowel mark is brown (yidag or hungry ghosts); and the gTérma marks are black (hell beings).