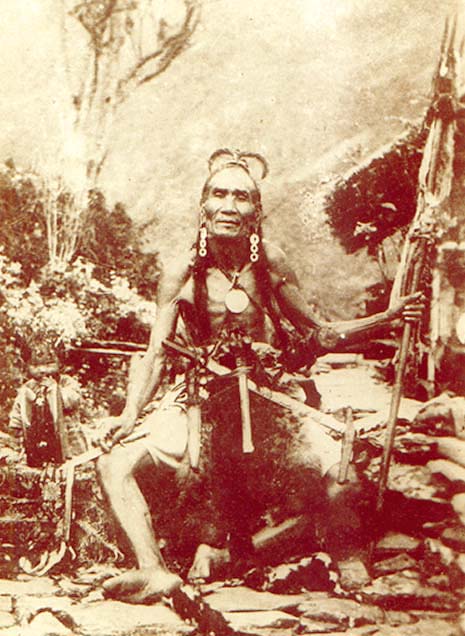 Golok Chagdar Rinpoche (mGo log lCags mDa rin po che – the Iron Arrow of Golok) was born in Chagmo, Golok in the late 1860s. For reasons unknown, he left for Sikkim in his mid to late 30s and lived there for the reminder of his life in Péyul Ma-yal Yang where he took residence there near Néchen Trak kar and Tashi Ding in a village called Gang-gyap and married a local woman (name not known as of present writing). She subsequently gave birth to a son. The son of Gong-gyap Rinpoche is reportedly still alive in Gong-gyap village (five hour’s walk west of Tashi Ding).

Gong-gyap Rinpoche (who is about 80 years old as of 2001) is described by a Western pilgrim as follows:
Gong-gyap Rinpoche was a vibrant ngakpa who possessed very clear and luminous eyes and a healthy body for his age. He lived in a traditional Lepcha bamboo house with his family where they made chang from millet and other grains.

Chagdar Rinpoche was respected as a siddha of considerable repute, and had attained the siddhi of flight. The account given of him in Sikkim is that he would commonly fly from mountaintop to mountaintop to meditate – practising integration with the sky. His sang-yum worried about his constant flying and bound his legs whilst sleeping with thick heavy chain. This kept Ngakpa Chagdar Rinpoche from flying away from home until his wife died – after which he managed to break free of the chains. He lived out the rest of his life with several remaining links of iron chain attached to his ankles which clinked wherever he walked, to remind him of the kindness of his wife.

In the photograph Chagdar Rinpoche wears chains from his earrings – but whether these are the chains which his sang-yum secured to his legs to prevent him from flying is not known, but it is perhaps possible that they may be symbolic of those chains.

This photograph shows Chagdar Rinpoche wearing a yeshé mélong – the wisdom mirror at his chest. He wears a leopard skin skirt but this is hard to see under his assemblage of swords and daggers. He carries a bamboo shafted khatvangha ornamented with a single skull in his left hand and a knife in his right hand. He is girt about with vajra weapons – a sword and three daggers. It is traditional for the gö-kar chang-lo’i dé to posses weapons of many kinds in respect of their wrathful practices and their relationship with the Protectors.

Ngak’chang Rinpoche says in relation to weapons:
The meaning of the weapons carried and owned by ngakpas and ngakmas relates to the annihilation of duality through the buddhakarma of destruction. The vows taken within the gö-kar chang-lo’i dé require every ngakphang yogi or yogini to bear weapons as symbolic reminders of slaying referentiality in all its forms. Every ngakphang yogi or yogini must at least own a picture of the assembled vajra weaponry – although, when I asked Chhi’mèd Rig’dzin Rinpoche about this, he responded that a picture was not sufficient and that I had to either acquire them or make them. When I lived with Lama Yeshé Dorje Rinpoche, I helped him make a set of vajra weapons from old oil cans – it was a lengthy task which made our fingers bleed – but I became intimately familiar with the weapons as a result. For me – the most important thing about owning a weapon as a ngakpa, is the sense of alertness required. The weapon reminds one of ones vows. Carelessness with a weapon can result in death so one needs to be careful and keep ones attention present at all times.

The little boy who can be seen at his right hand is the young Gong-gyap Rinpoche; and, although it is not clear in the photograph, Gong-gyap Rinpoche is wearing three feathers in his hair – in the style of Rig–dzin Godem.