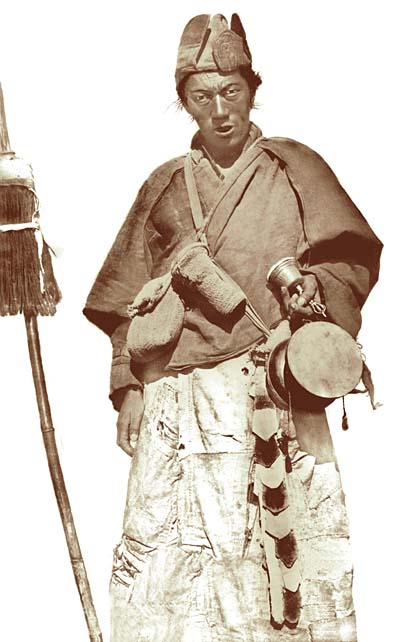 This wandering Nyingma Ngakpa Lama is typical of the many wandering gÇodpas who traveled throughout Tibet practising gÇod in charnel grounds and other such normally terrifying places. Often disregarded by European travelers to Tibet as beggars, these Nyingma yogis and yoginis could sometimes have been important Lamas. The white Ngakpa’s shamthab of this gÇodpa is a complete pastiche of rags, and his mountain retreat hat shows the signs of many years wear. He is pictured here reciting a section from the practice of gÇod for local people he has met. gÇodpas would often announce their presence in villages through which they passed by chanting as they walked – this was both to solicit alms and to offer their services to the local population. gÇodpas were well known for their ability to terminate epidemics and they could always be called upon to carry the dead to the charnel grounds. It was part of the life of a wandering gÇodpa or gÇodma to render help to others in relation to death and disease. They were without fear for their own corporeal existence and thus able to bring comfort and support to others in times of crisis.

The gÇodpa in this photograph has leant his khatvangha trident against a wall whist engaged in recitation. The strap across his shoulder holds a pouch for liturgical text and a pouch for his bell – gÇodpas and gÇodmas carried everything they needed to survive and practice, wherever they went.