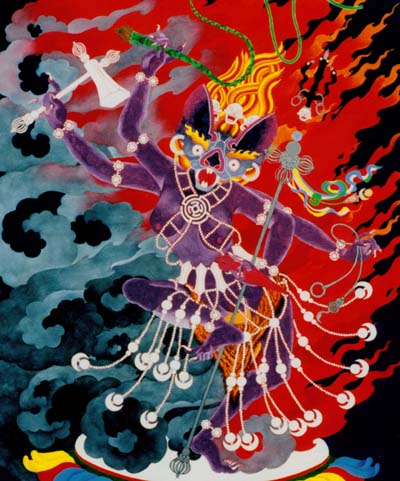 Ga-phong Dongma (sGa phong gDong ma), also known as khandro ga ’chi dongçan (mKha’ ’gro rGa ’chi dang ’chi ba gDong can), is the bat-headed dakini who has dominion over the physical sickness caused by mental aberration. The practice of Ga-phong Dongma is connected with rituals of exorcism (chir-log – phyir zLog) which employ mudra and dance. The imagery of the bat is extended to costume and to various ritual implements including the use of a ko-tum (sGa phong ko ’thum) of bat leather which is whirled above the head during recitation. Ngakpa Yeshé Dorje Rinpoche employed the ko-tum when curing people of illness, and was well known as a travelling weather-maker who specialised in rites of exorcism (gTo ’bol ba).

As in all forms of exorcism within Buddhism – it is fundamentally dualism which is being exorcised. Ngak’chang Rinpoche says:
There is no sense of ‘an evil entity’ – only a state of dualistic bewilderment – whether connected with oneself or with attack from other beings. Exorcism is therefore always concerned with release from the most tortuous convolutions of desperately self-serving self-destructive strategising.

Like Dorje Tröllö (rDo rJe gro lod) – she bites her lower lip in the clear anger that is beyond subject and object. Her two razor fangs are described as shearing through the illusion that form and emptiness can be divided, and the screaming dissonance of her screech dispels the demons of disease and mental disorder.

There are many animal-headed dakas and dakinis within the Aro gTér cycle of yidams and Ga-phong Dongma is one of the most wrathful of her class. She is similar in many ways and secondary functions to Seng-gé Dongma – the lion-headed dakini – in the same way the primary purpose of her practice is transformation of dualistic neuroses which are liberated into the sphere of the Buddha wisdoms for the benefit and eventual freedom of all beings.

Her iron hair pulses with smoke and flame, displaying her ability to choke every nuance of dualism. Khandro Déchen says:
Her horrific complexion is dark purple: the colour of eviscerated entrails, and of fire seen through poisonous smoke – reflecting her non-dual rage at all obstacles to realised vitality and non-dual well-being.