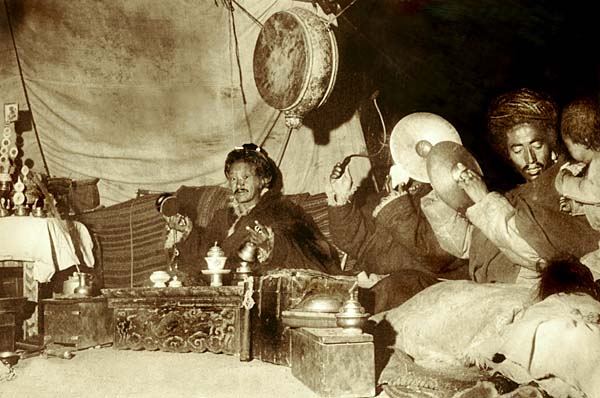 This photograph portrays a delightful scene of the family style of practice, which is prevalent within the Nyingma tradition of Tibetan Buddhism. Here three yogis, with togden (rTogs lDan) style hair arrangements, practise a liturgical ritual together – joined by two children (far right). It was normal in yogic encampments for children to play amongst the practitioners as they practised. The play of children was never seen as an interruption or as a distraction from practice – because, according to the view of Dzogchen, all forms of distraction were seen as being within the mind of the practitioner. The Lama in the middle of the photograph has a takdröl wound into his togden’s matted braids – and it would thus appear that he would be the senior Lama of the gathering. He also plays the drilbu and damaru – which are traditionally played by the presiding Lama. These Nyingma Lamas of the Gö-kar chang-lo’i dé (Gos dKar lCang lo’i sDe) are part of a nomadic community and are pictured here in a large nomad’s tent – gar (sGar). On the table to the far right of the photograph are arranged gTormas and other offerings particular to the rite being performed.

Ngak’chang Rinpoche says of family practice:
The Nyingma tradition, although it has its monastic streams, actually encourages family life for a great number of its practitioners. Many of the greatest Lamas of the Nyingma Tradition have been family people. In the 20th century His Holiness Düd’jom Rinpoche was a family man – as well as being the most highly revered Lama of the Nyingma tradition. Tharchin Rinpoche – a disciple of both Düd’jom Rinpoche and his son Dung-sé Thrin-lé Norbu Rinpoche – is well known for his love of children, and arranges special retreats at which children are especially welcomed. The presence of children on his retreat is never seen as a problem and his own son often sits with him when he teaches. Tharchin Rinpoche is a well loved and highly respected Lama of the Nyingma tradition and lineage holder of the Repkong Ngakpa tradition which for centuries has viewed family life as a natural correlate of the highest spiritual yogas. Tharchin Rinpoche told me once that he remembered his own father sitting up in bed practising pho-wa – which he, as a child, always associated with cold air, due to the gap in the sheets caused by his father’ s yogic posture. Stories such as these demonstrate the naturalness of integrating practice of the highest level with a normal family life. Tharchin Rinpoche describes his father as an extraordinary siddha – who had enormous powers of healing, so it is evident that he did not require the careful insulation of an institutional environment to manifest his siddhis.