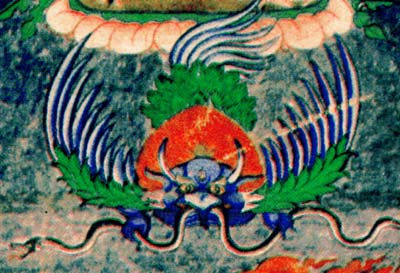 The garuda that flies above Dorje Phurba’s head is grasping a snake and biting through it. Traditionally the garuda is the enemy of the nagas – beings who are depicted in the form of snakes. Iconographically the snake represents aggression and the garuda represents the wisdom that cuts through aggression. As a Dzogchen symbol, the garuda represents spontaneous presence. The garuda is born fully grown and flying from its egg, in the same way that the discovery of non-duality arises spontaneously in the moment through Dzogchen transmission.

Sometimes the garuda is depicted as a great bird, and sometimes as a bird with a human torso. The Aro gTér emblem of a garuda does not hold a snake, but instead holds a wisdom mirror (ye shes me long). The colours of the garuda reflect the colours of the five elements. Ögyen Grauda – Padmasambhava manifesting as a garuda – holds nine-pronged meteorite iron phurbas in each hand and nine-pronged beryllium copper grigugs in each claw. He also wears human bone cementary ornaments.