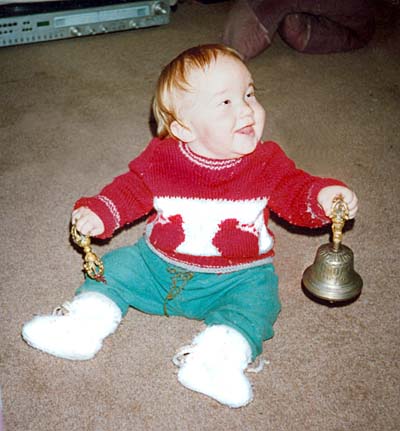 with bell and dorje

Daniel is illustrated having a jolly time as a baby with a bell and dorje. Both Daniel and Richard were blessed by Ngak’chang Rinpoche when they were babies, and given the names Mikyö Dorje and Sem-nyid Dorje. Since that time they have both attended refuge ceremonies and been given refuge names. Ngakma Nor’dzin and Ngakpa ’ö-Dzin try to give Daniel and Richard the space to make their own decisions about their spirituality, but are pleased that they call themselves Buddhists if asked.

It has been difficult at times to get the balance right, with regard to religious attitudes, especially while they were at infant and junior school, observes Ngakpa ’ö-Dzin. The primary school that they attended gave quite a narrow and definitive view of Christianity and Christian morals, and tended to indoctrinate this into the school day and curriculum more than we felt was necessary or appropriate in a state school. It was sometimes tricky to answer the boys’ questions open-heartedly without appearing to completely negate the moral and theistic view being offered to them at school. We have wanted them to develop a respectful attitude towards Christianity and any other religions they encounter, and to see these as alternative approaches and beliefs rather than wrong approaches and beliefs, continues Ngakma Nor’dzin. As Buddhist parents we wished to place the emphasis on kindness, respect and appreciative communication, rather than on adherence to the rightness or wrongness of spiritual method. Unfortunately Ngakpa ’ö-Dzin adds, they have often failed to receive the same degree of tolerance in return. The general impression given by the school was that alternative religions were acknowledged, but that Christianity was, of course, the ‘real’ one.

Ngakma Nor’dzin and Ngakpa ’ö-Dzin have been impressed with Daniel and Richard’s mature and tolerant approach to such matters. They have become considerate and caring young people. They do not accept whatever we say, just because we say it, says Ngakma Nor’dzin, and we have often found their questions challenging. Daniel and Richard display a surprising depth of insight, sometimes into teachings, that we are not even aware of them ever having heard. Ngakpa ’ö-Dzin says, It is one of the most moving and inspiring of experiences, to hear your ten year old son singing Yeshé Tsogyel mantra quietly to himself before he goes to sleep.