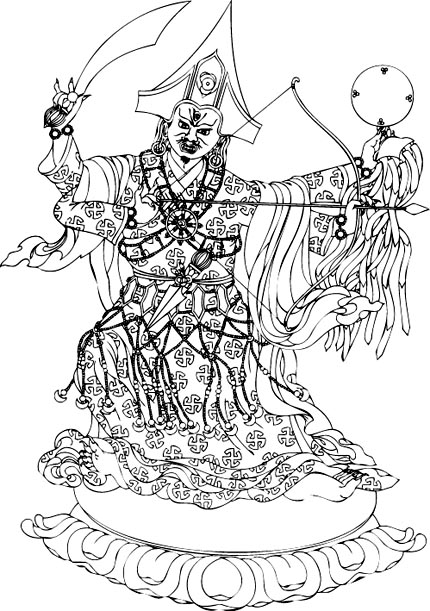 Ögyen Jampalyang is also known as ‘The Violently Insane Vajra Cannibal’ who devours all attempts to validate unkindness or concretise non-dual intelligence. Ngak’chang Rinpoche says of Ögyen Jampalyang:
He awakens the glorious intelligence of the clear heart. Where sanity has become the uncompassionate path which spiritualises dualistic neuroses, his violent insanity destroys heartless pragmatism, mean mindedness conservatism, and passionless conformity. Where religious orthodoxy has constricted the heart of kindness, his violent insanity destroys the self-serving strategies which place philosophy above the natural intelligence of human warmth and friendship. Where cold-blooded intellectualism has clouded the wisdom of the sense-fields, his violent insanity destroys the arrogance which has no hospitality for divergence.

His vajra bow and arrow annihilate dualism. His bow is made of iridescent black steel, sprung spontaneously from the wisdom-energy of emptiness. His bow string, woven from the pubic hair of a hundred thousand million dakinis, guides his arrows through the illusion of space and time. His arrows are the vivid rays of the sun and moon, which shine through all forms of stupidity with the sharpness of pristine perspicacity. The flaming nine-pronged scimitar of acute knowledge in his upper right hand, hacks monist belief into infinite disparate shreds. The obsidian mélong in his upper left hand, draws the life energy of nihilism into itself, and dissolves it in the infinite reflection of intelligent space. In his belt he wears the nine-pronged meteorite iron phurba which destroys dualistic reasoning. His right leg is extended outward in token of fearless kindness and relentless discernment.