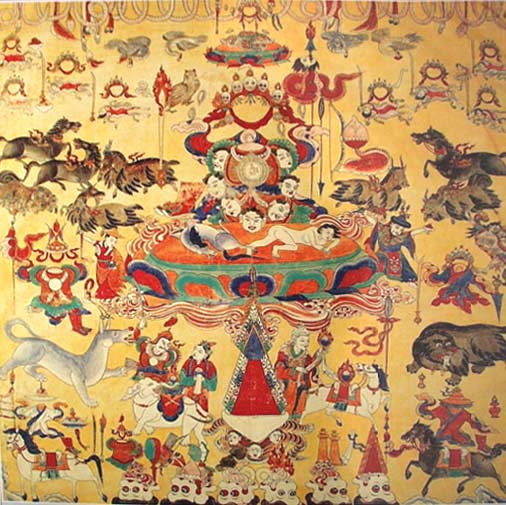 This image is of a thangka of Begtsé offerings. Begtsé (Beg tse lCam sring / Prana Atma) is a Chö-kyong (chos sKyong / Dharmapala / protector of the teachings) and a practitioner of this protector could own such an offering thangka for use in their practice of invocation. The thangka portrays hosts of animals and other beings, along with aspects of the phenomenal world that are connected with Begtsé.

Ngak’chang Rinpoche comments:
Chö-kyong are ultimately the self-protective nature of reality and we can link ourselves to that energy through ‘offerings’. Offerings are a symbol of connection rather than something given or received. Presents may be given to a lover – but they are only a symbol of what is intended. Likewise—but at a far more subtle level—protector offerings are simply the efflorescence of intention in the visual language of the Chö-kyong invoked.

Begtsé is translated into English as ‘Hidden Mail-shirt’ or ‘Great Coat of Mail’. He is a special protector of both the Gélug School and the Nyingma tradition, and main protector for the Tamdrin (rTa grin / Hayagriva) cycles of practice. According to the Nyingma Tradition, Begtsé was a warrior demon of Tibet who was oathbound by Padmasambhava. According to the Gélug School Begtsé was a Mongolian warlord and several details in this offerings thangka refer to the regalia and equipment of battle. The powerful Mongol King—Altan Khan—challenged the 3rd Dalai Lama to convert the Mongols to Buddhism in 1577. The Dalai Lama—leading an army of animals—found himself confronted by the Mongolian king and manifested as Chenrézigs (sPyan ras gZigs / Avalokiteshvara) the yidam who personifies empathetic appreciation. The footsteps of his horse left the imprint of the mantra Om Mani Peme Hung in the sand. This miraculous display convinced Altan Khan of the power of Dharma, he submitted, and Mongolia took to the practise of Buddhism. Begtsé predates this event vis-à-vis the Gélug School however, as both the 1st and 2nd Dalai Lamas engaged in Begtsé practices.