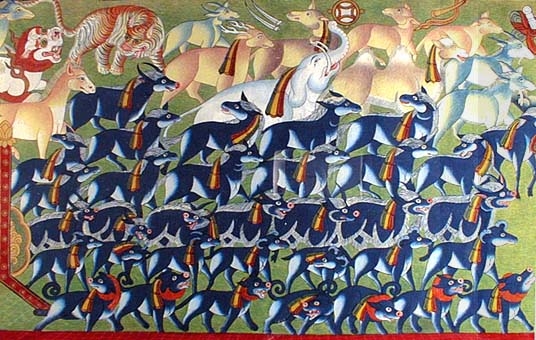 A host of animals

These animals appear on the bottom of a protector thangka. They represent the power and greatness of the protector – he commands these hosts of animals: magnificent and beautiful horses; exotic and unusual animals such as camels and elephants; powerful and dangerous animals such as bears and lions; mystic and mythical animals such as the snowlion; shy and dynamic animals such as deer; and domestic animals representing wealth such as goats, sheep and yaks. In Tibet such animals would have represented one's status in the same way that today this might be expressed by a car, a sound system or a computer. Perhaps one day a protector thangka may be illustrated with computer screens from floor to ceiling and a parade of gleaming Rolls Royces and Mercedes Benzes.