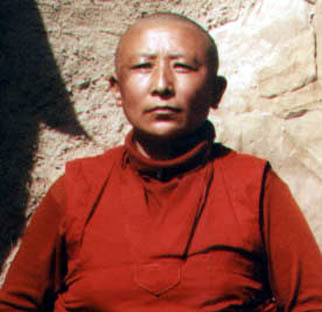 Ani Bumchung has been a friend of Ngak’chang Rinpoche since 1981 when he was staying in Tso Pema. Ani Bumchung lives in permanent semi-open retreat in Tso Pema where she has a retreat cave. In the hills above the lake of Tso Pema there are a number of retreat caves which are presided over by the Retreat Master Lama Wangdor Rinpoche. The name ‘Ani Bumchung’ literally means ‘little girl nun’ and has been a nickname which has remained with her.

Ngak’chang Rinpoche says of her:
Although she is well known and loved for her ‘little girl’ qualities of laughter, humour, and whimsy – Ani Bumchung is respected and revered as a highly realised yogini. She is a profound practitioner of Tröma Nakmo – the ‘Black Wrathful Mother’ – from the gTérma of His Holiness Düd’jom Rinpoche.

The photograph of Ani Bumchung was taken when she was sitting in meditation in front of her retreat cave.