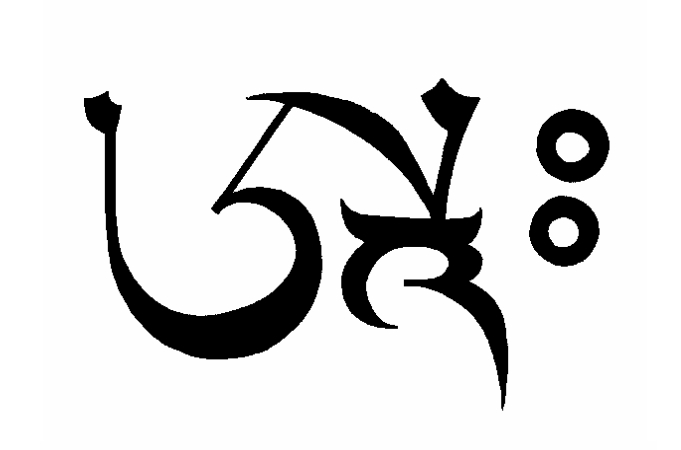 the symbol of the sphere of visionary appearance

A’a is the symbol of the sphere of visionary appearance – Sambhogakaya, long-ku (kLong sKu). The syllable A’a consists of the Tibetan letter A with an a-chung (little ’a) beneath it. In Tibetan Buddhist symbolism—and particularly in the Aro gTér—four syllables can be found that all sound like ‘Ah’. The A with an ’a-chung—as shown here—is commonly used. The syllable A on its own may be referred to as the Dzogchen A and when sung for the length of a breath represents lama’i naljor in its most essentialised form. Three syllables that all sound like ‘Ah’ are found in the practice of dream yoga. These are the short, blue ’a-chung on its own; the white Dzogchen A written in a particular style, and the long, red A’a’a consisting of the syllable A with two ’a-chungs beneath it. These three syllables—’a:, A: and A’a’a:—may also represent the three kayas.

The syllable A’a is visualised as red at the throat of Ma-gÇig Labdrön during the practice of her Lama’i Naljor. We unify with the speech of Ma-gÇig Labdrön through receiving rays of red light and experiencing the syllable A’a appearing at our throat. Through this practice we may experience A’a as the radiant symbol of limitless co-emergent appreciation, the energy of communication and bodhicitta.

This syllable is the display of energy which arises in unconstrained lucidity from the primal purity of creative space. A’a is the sphere of light & sound; the sphere of non-dual visionary experience and non-dual sensation. It is the dancing interplay of translucent phenomena which is constantly becoming and continually dissolving into creative space.